PAUL ALLEN- a life of passion for ideas made real 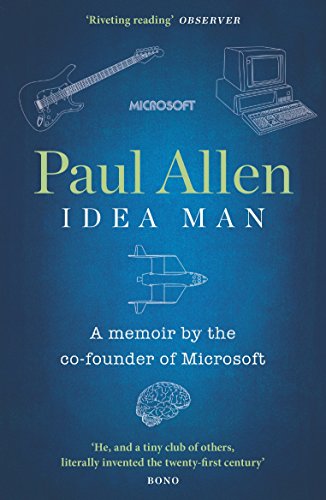 Idea Man: A Memoir by the Co-founder of Microsoft
By Paul Allen

Do you fantasize about your entrepreneurial future, in a cold afternoon, over pizza?? A young man did, back in 1974 ‘If everything went right, how large our company could be?’ he asked his partner, Bill Gates…Dreaming is a form of planning, and most people who made it big, start with asking that one question which opens the world of excitement and as a result, smashes the gates of possibilities.

Paul Allen wrote one of my favourite books, ‘Idea Man’ and many times when I feel ‘restless and ready to try something new’ as he says, I understand that is entirely up to me to deliver a solution for a certain challenge.

And, while you wonder why I talk about Paul Allen, who died today in Seattle after fighting his terminal illness for 9 years, I have to say that this is an invitation to celebrate his life, a life of a prodigy Solutionary, the Idea Man.

Co-founder of Microsoft, Paul Allen is considered to be one of the top one hundred most influential people in the world. His philanthropic spirit impacted the world of creativity, business, science, technology, medicine, sports and music .

Paul Allen solved problems, and delivered his vision for the future landing triumph after triumph and looking failure in the eye during an extraordinary life of passion for ideas made real.

Idea Man is a daring story, an unique insight into his life, the life of a true Solutionary.